Revolution Conference, or commonly referred to as RevConf, is an annual gathering of the country’s most creative and talented software developers. This was the second year for RevConf and just like a child the event grew significantly in one years’ time. The beautiful Wyndham at the North End of Virginia Beach was the new and improved venue, attendance increased from 250 people in 2016 to a whopping 350+ in 2017 and the amount of speakers literally doubled (from 28 in 2016 to 56 in 2017). The elite list of sponsors included Google, Microsoft, Marathon Consulting and Heroku, just to name a few!

Marathon Consulting is one of the original supporters and sponsors of the event. The consultants from Marathon look forward to the event for the professional development and opportunity to network with the “best of the best”. This year the lucky list of Marathon attendees included Jeff Jacobs, John Hadzima, Tom Marsden, Lindsey Mashburn, Matt Sargent, and Eric Wilkinson. Matt Sargent, one of Marathons Senior Consultants, was even selected to speak at the conference. Matt’s presentation, “Alexa…Cook My Dinner” covered the topic of IoT (internet of things) and Amazons popular Alexa device. The presentation was a crowd favorite! 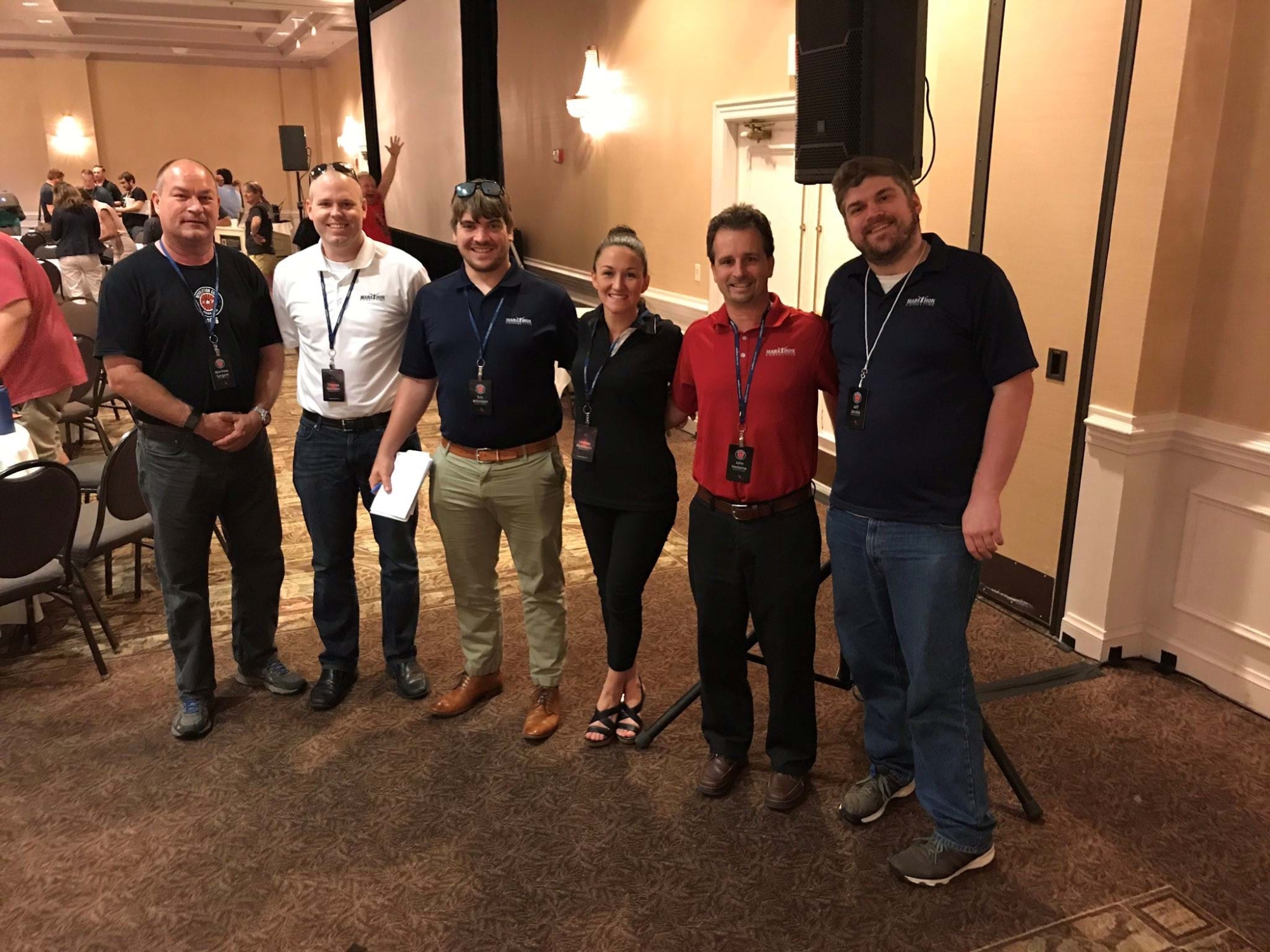 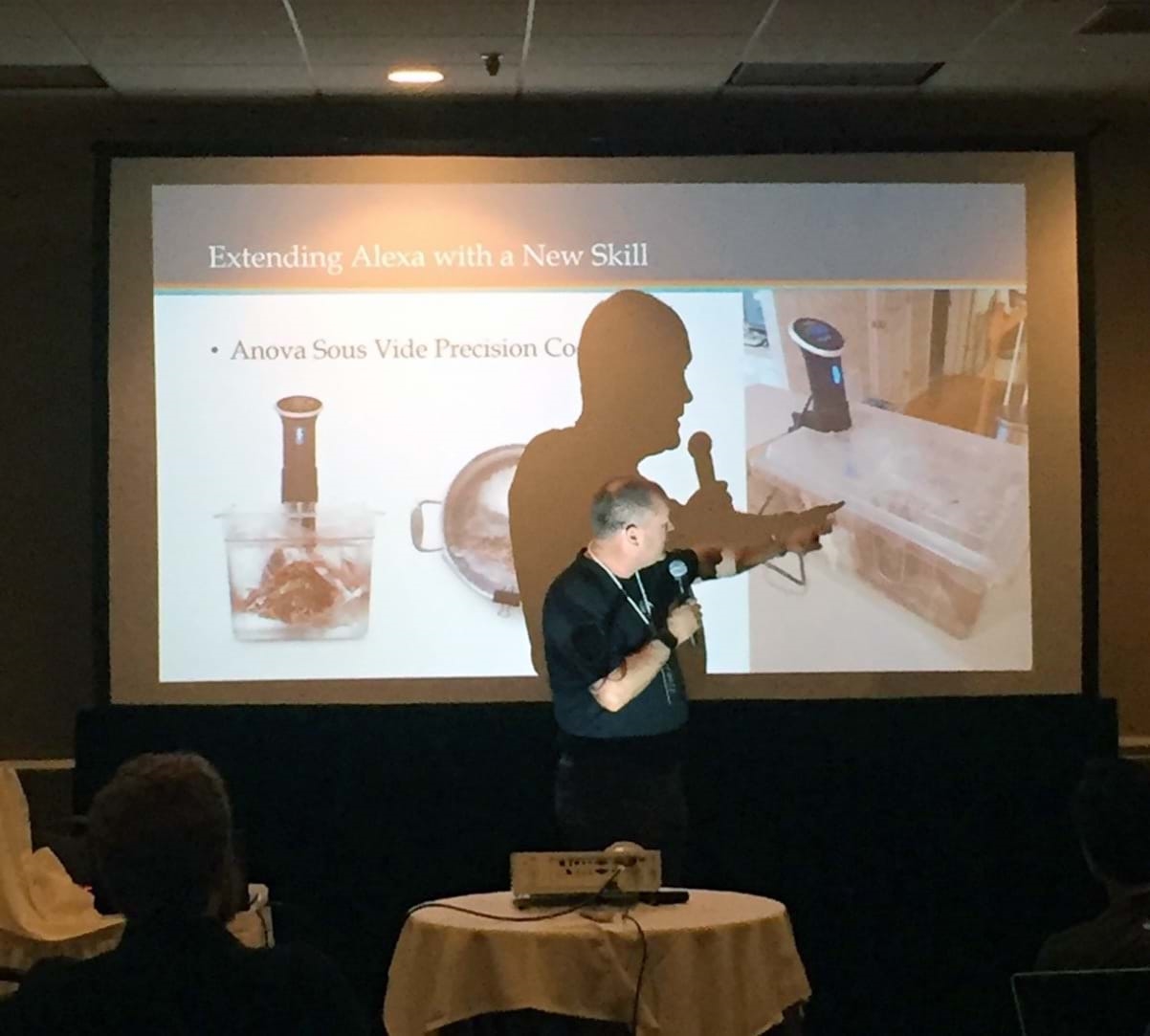 The goal of the conference is to have platform and language agnostic talks and not only did it deliver but it exceeded everyone’s expectations. With so many great speakers, the attendees were faced with the difficult task of deciding on which presentation to attend. Complicating that decision was the addition of half day workshops that allowed for technology dives in areas such as Azure App Services, ES.next, AWS, and Docker.

The speaker roster not only increased in number from the previous year but also in quality. Speakers from as far away as England and Germany and from companies such as LinkedIn, Google, and Microsoft came to share their knowledge with the attendees.

Of course, since it was a technology conference you had a lot of very technical presentations, but this year the speakers also dived into the not-so-technical side of the industry. Heidi Waterhouse, Paul Chin and Emily Freeman were just a few of the speakers that veered off the techy talk for a bit. Their topics discussed the everyday challenges that, developers, and really all professionals face on a regular basis.

Emily Freeman’s presentation, “The Dr. Seuss Guide to Code Craftsmanship” provided advice and actionable steps that developers can take before writing code to avoid “having a mild psychotic break” during the development lifecycle. Everyone in the audience shared some good laughs! Many of us left feeling inspired to be more empathetic to those around us and to give ourselves a pat on the back every once in a while. 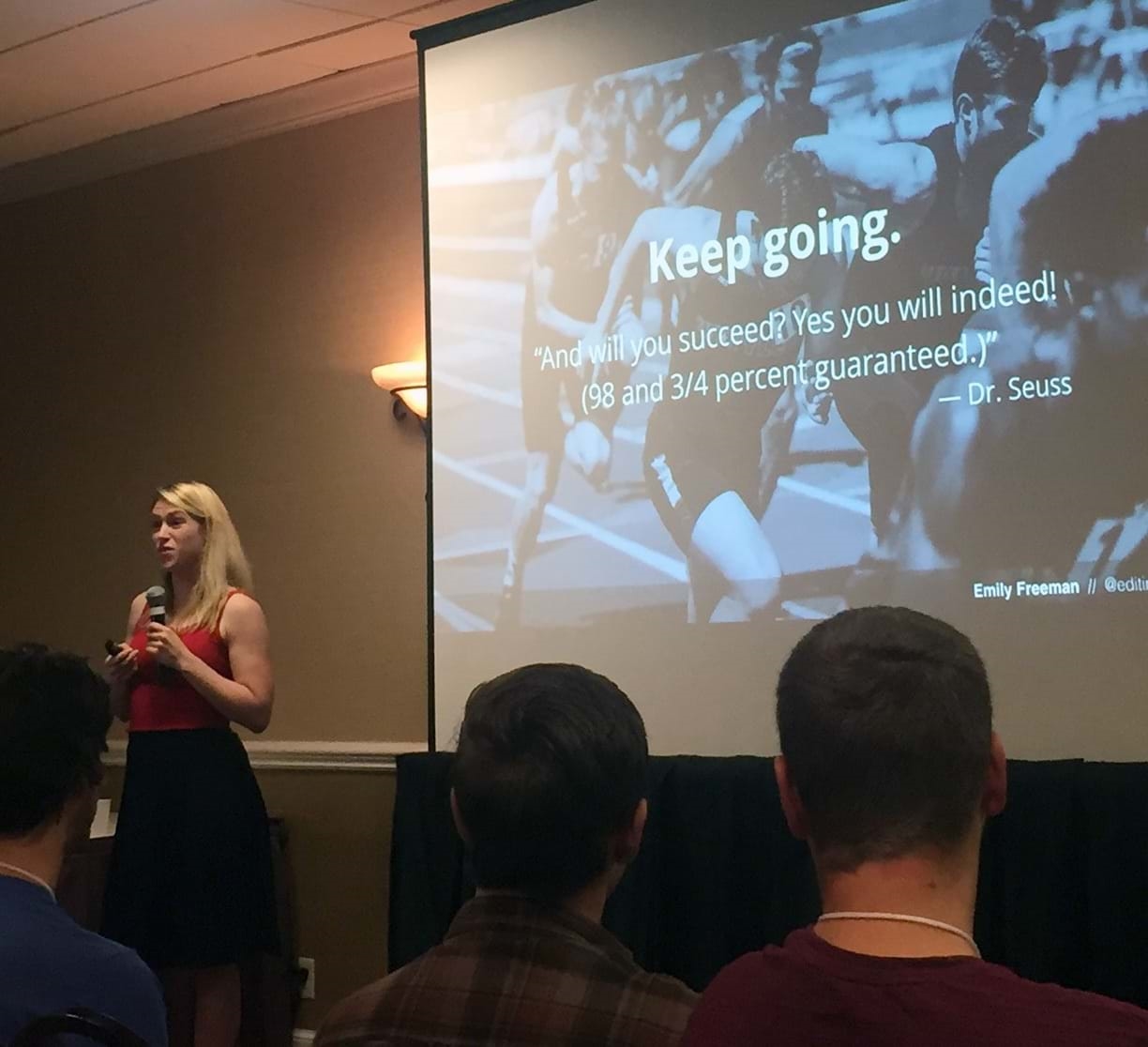 “I have ADD and so can – ooh, shiny!” presented by Heidi Waterhouse was a big hit too! Her discussion gave great insight into neurodiversity, the “invisible disabilities” that many of ourselves and teammates struggle with. Heidi encouraged the audience to embrace neurodiversity and use it to create strong, creative and more efficient teams, ultimately resulting in better development and better products.

Paul Chin’s presentation on “Nicolas Cage: The Path to Programming” was hilarious and extremely motivating. He encouraged the audience to start all those projects we’ve been daydreaming about and procrastinating on. Paul reminded all the developers (junior to senior) that everyone is “capable of building anything they want, no matter how silly it may seem”.

The first day also offered an opportunity to see the keynote presentation from Karen Jackson, the Secretary of Technology for Virginia. She talked about many of the technology initiatives her department works on for the state around areas such as cybersecurity, drone delivery, and autonomous vehicles. 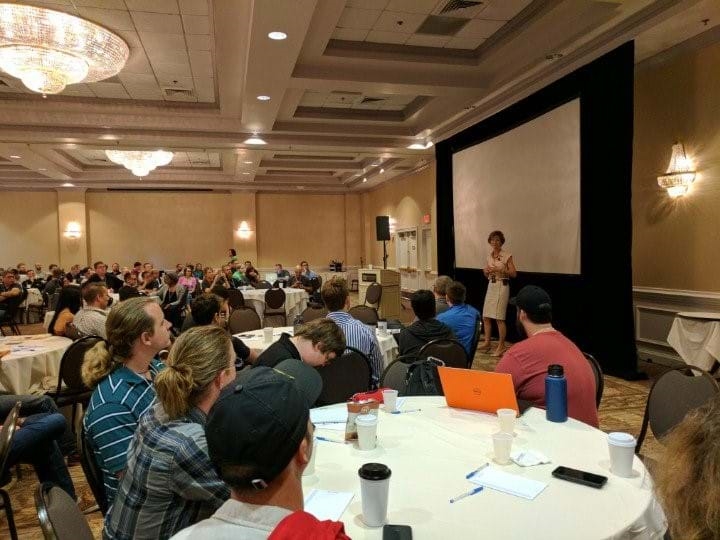 The end of the first day was capped off with a fantastic luau on the back deck of the hotel. An open bar and delicious dinner provided a great opportunity for everyone to unwind after a long day of learning. 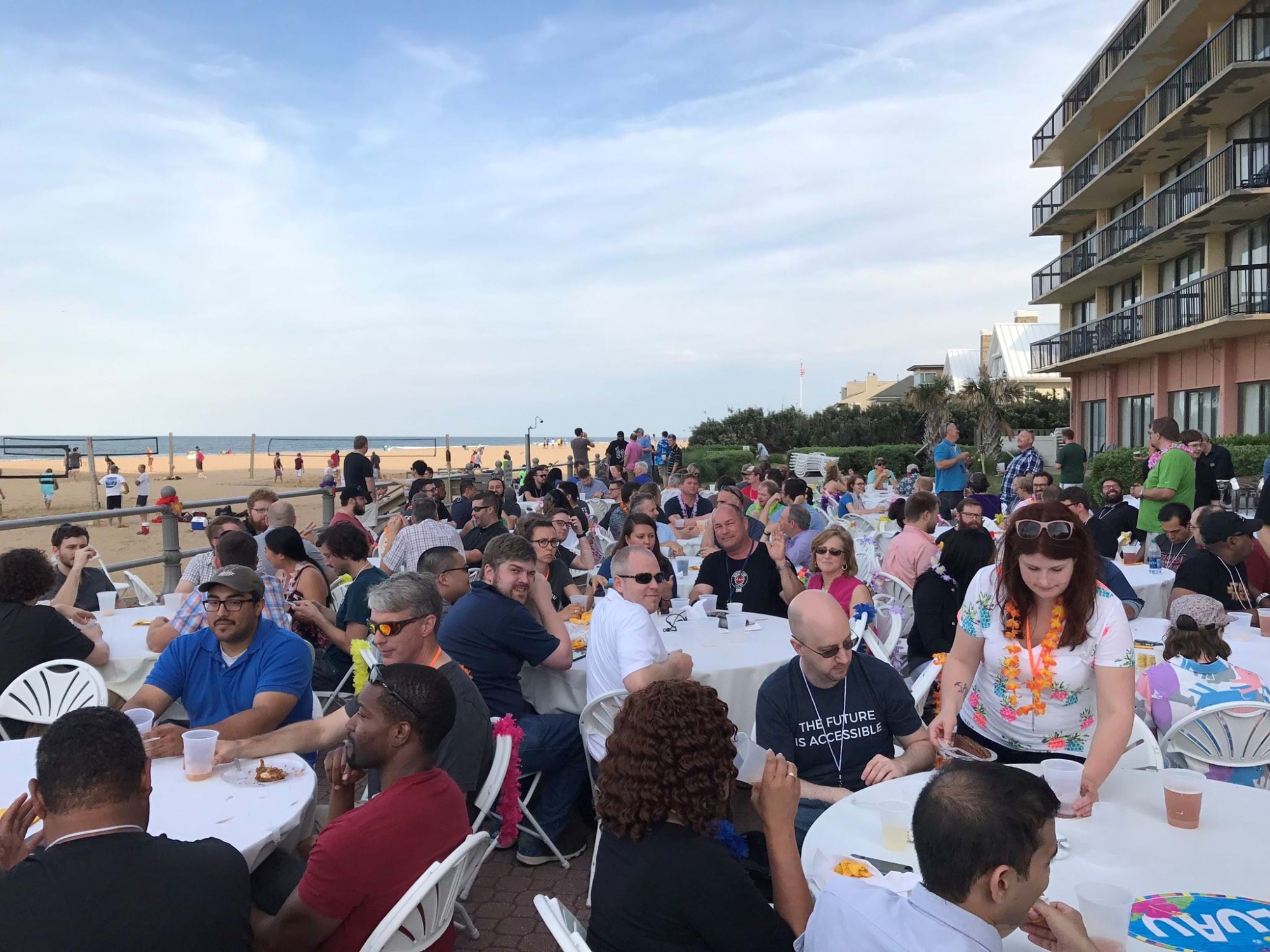 RevConf grew in a lot of ways in its second year. Overall, it presented an excellent opportunity to learn from great speakers, network with other IT professionals, and revel in the excitement that this conference brings to the Hampton Roads area. It was the perfect blend of technical topics and discussions that addressed the everyday challenges we all face, whether you are a developer or not. The participation and enthusiasm from the crowd was energizing. Watching passionate, driven, creative, and intelligent professionals interact with one another was very inspiring. I’m willing to bet everyone in attendance left the conference feeling re-energized, excited about tackling new projects, and inspired to go out and learn something new!  Next year promises to be bigger and better, and Marathon Consulting looks forward to being a continued supporter of the event.

Interested in working at Marathon? We are hiring Web and .Net developers!

Send your resume to recruiting@marathonus.com.